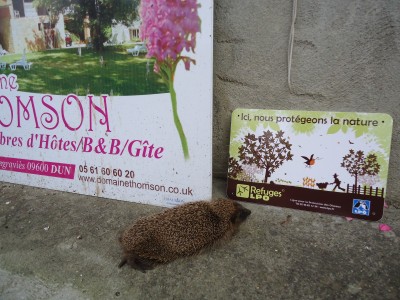 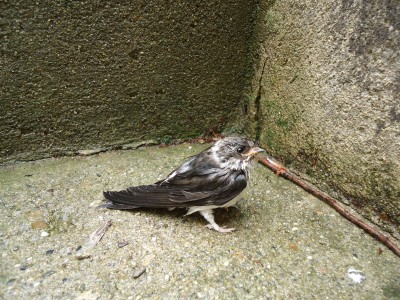 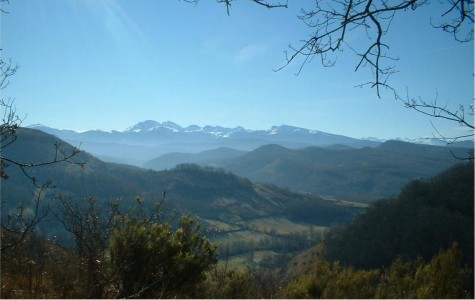 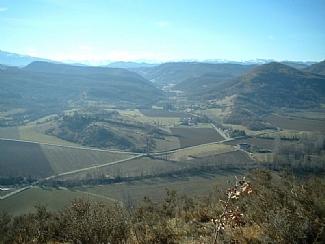 Birdwatching and Wildlife in the Ariège offers a tremendous range of bird species to interest and attract enthusiasts, whether they have journeyed here from afar, or whether they live here, and enjoy marking the seasons alongside the many birds that live here permanently, with the appearance and re-appearances of birds that they consider to be friends when they move in again at certain times of the year.

It is big country here, in the foothills of the Pyrenees, with set after set of rolling hills going as far as the eye can see. Hills that gradually get higher and higher until you are in the Haute Pyrennees. These hills are naturally wooded with a mixture of deciduous trees, including oak, chestnut, cherries, apple, plum, willow, walnut, birches, thorns and ash. There are some areas of farmed pine, which are carefully intersected with sections of deciduous trees. In the valleys the land is used for farming – vines, sunflowers, wheat, maize, clover, millet and oilseed rape. The fields are bordered with hedges made up of a variety of trees and shrubs. This is also an area in which sheep and cows are farmed for both cheese production and veal. There are many rivers and streams, whose courses have been uninterrupted by modern farming practices generally edged with plentiful trees and areas of scrub. In terms of plant diversity this is a very rich and verdant landscape. And the complement to this is that it provides a fantastic habitat for insects, wild animals and birds forming a very natural food chain.

I am passionate about helping people to have a better knowledge of this part of the Ariège. Domaine Thomson has, as its playground, a remarkable natural resource that can be enjoyed by just sitting in the garden, going for walks from the back door, or going on expeditions a little further afield.

From the garden alone one can see an enormous variety of birds, e.g. tits, bats, swallows nesting, nightingales, golden orioles, red kite, buzzards & eagles – several varieties, other birds of prey, tree creepers, hoopoes, other woodpecker varieties, sometimes heron, many of the garden birds one is familiar with in the UK, and so the list goes on. I consider it to be a good birdwatching area even though I don`t consider myself especially knowledgeable. But I am getting better at identifying them and also their song.

I read an article a few years ago that said that as the spoken accents of humans varied depending upon what region they lived in, so did bird song vary. I can only agree with this. In the UK there is for me nothing easier to recognise than the song of a blackbird. Here, in the south-west of France they sing something altogether different. It is extraordinary. So this is one of the reasons it is taking me a while to get to `re-know` them and other birdsongs that I was never quite so confident of recognising. It has been disconcerting.

It is lovely that whilst sitting in the garden having a cup of tea, one can be watching a treecreeper busily pecking away at the bark and then taking a selection of its loot to a nest and feeding its young. It is great that a hoopoe or two will not feel the need to fly away whilst you are sitting there. I love to see their remarkable colours and their decorative crest. A truly amazing thing – or I think it is, is to be lying floating in the swimming pool, and have swallows flying around and taking long diagonal swooping dives along the length of the pool dipping to take a drink before soaring off, doing a circuit and then coming down again for a repeat performance. They do this at certain times of each day (during the period they are here) and I love to see it. Another thing, is to be, again lying in the pool, and to see drifting and soaring lazily across the valley, more commonly a red kite, sometimes an eagle, and at other times buzzards. They come in reasonably low, so you can see their markings very clearly. In the summer evenings at dusk there is no shortage of bats flitting around catching insects.

A person does not have to be particularly fit and active to enjoy all those things. If of course, you would like to go for walks in the locality, or further afield up in the high mountains, then there are many more sightings you will undoubtedly have. As I have mentioned already this is a very rich country and the conditions for viewing are pretty ideal.

There are some official birdwatching sites of interest with hides from which to position yourselves. Details about one of these follow. Ledomainedesoiseaux.com

I am not a proper `twitcher`, but from the days when I used to go hillwalking in the mountains in Scotland and got occasional glimpses of red kite at what seemed to be miles above my head, and times when I arrived at stony summits and found several ptarmigan which I successfully photographed. Those were occasions when my interest in birdwatching was confined really to the rare sightings.

By contrast, here I love seeing the already mentioned varieties of birds on an almost daily, or seasonal basis. I think for me last year, the best thing I saw as regards birds, was when on the 21 September, all the swallows which had spent the spring and summer here, all gathered over a period of an hour or two, onto the telephone wires outside my house. These wires criss-cross the nearby houses as well as mine, and as the morning passed there were hundreds and hundreds and hundreds of swallows all just waiting, occasionally something would disturb them and they would all rise up into the air with a real whooshing of their wings, before settling down again. It was uncanny. Then suddenly, they all went off together. That was the most remarkable moment. And to have seen them depart for their migration south. I felt privileged. And so did others also staying here. It was a special moment.

Guests staying at Domaine Thomson will be able to come to either take in whatever is here, or choose to come with certain species in mind to see. Birdwatching can be a part of the holiday as well as doing other things, or it can be the main focus. It would be possible to plan in advance certain viewing points with certain species in mind should that be required. With advance notice advice can be sought from keen birdwatchers who live in this area and are very familiar with seasonal variations that occur.

List of birds seen in and around Engravies, with one or two only seen in the high mountains.